"Will be no subsequent period, sometimes together, July 24 release." - At 9:05 on May 29, a famous writer, director, racers, thousands of otaku father Han issued such a micro-blog. After 24 hours, a good report card was born: 330000 forwarding, 90,000 comments, and 150,000 points praise. So far, the amount forwarded this microblogging has more than 37 million times.

Forwarded within 24 hours 330 000 What is the concept? Another strong opponent of the data may be used as reference: When GJM released "Little Age 3" trailer microblogging forwarding number within 24 hours of 26 million people, the official micro then said excitedly, "Crack the record, simply can not stop down. " The amount of microblogging forward Han "no period after" catch-up this figure, only half the time.

Yes, in terms of social media alone, "will have no period" has been created in the history of the most popular trailer. Han is how to do it?

the video：http://v.youku.com/v_show/id_XNzE4NjI4ODQw.html
No period after the pilot trailer

If you put half a year ago - at that time, "no period after the" No boot - Han microblogging probably will not appear so grand. January 6, 2014, Han announced his directorial identity. After six months in the number of newly released microblogging Han almost more than the sum of the past. This is also the Han since April 1, 2012 since the reopening of microblogging, microblogging issued the highest frequency for some time.

Han humor is consistently sharp text style, which makes him a natural built-in "Satin Hands" attribute. So, when Han improved after the microblogging activity, everything moving in the direction of the masses loved. For the "satin hand" evaluation, so Han responded ↓

A person becomes satin hand is not difficult, the difficulty is to let a group of people to become satin hand. As often in micro-Bo Han po few stills, microblogging under review were slowly changed ↓

In this case, users are beginning God replies trend has now towering, Han also noted that his choice is: courage from black, to continue the challenge. This is the result of the challenge ↓ 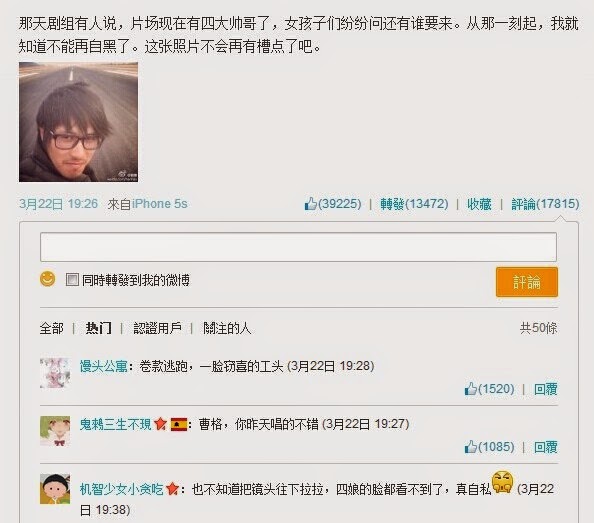 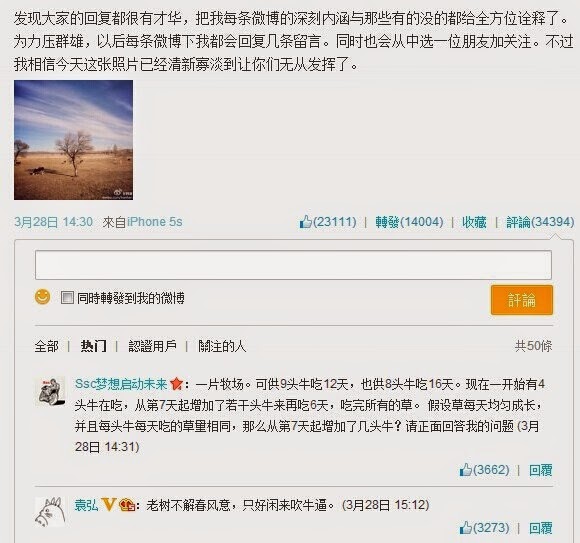 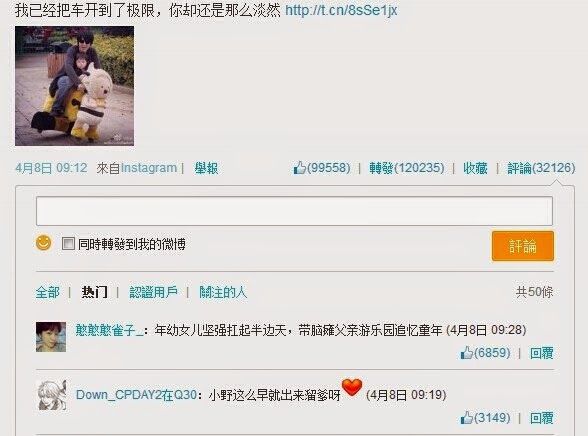 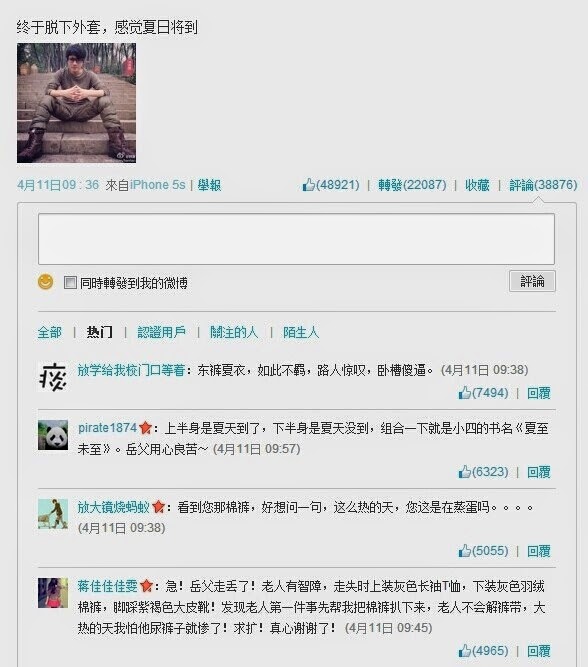 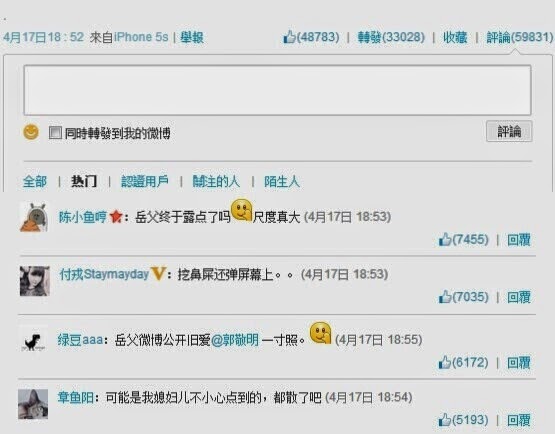 After promotion to the national father and Uncle Brother ↓ 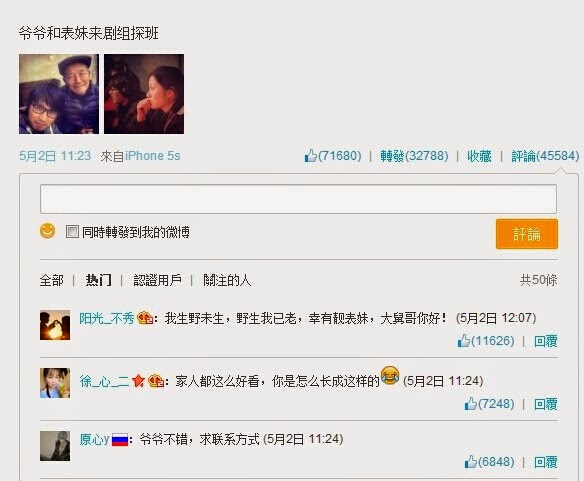 Obviously melancholic content or would lead to such comments ↓ 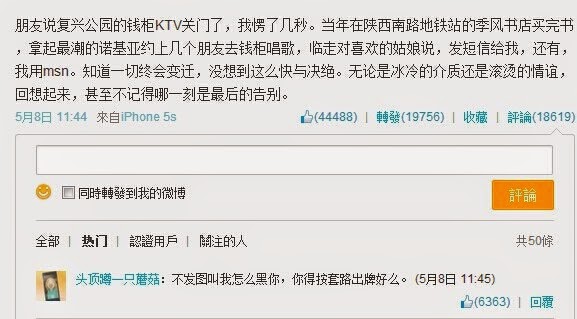 So since Black became a habit ↓ 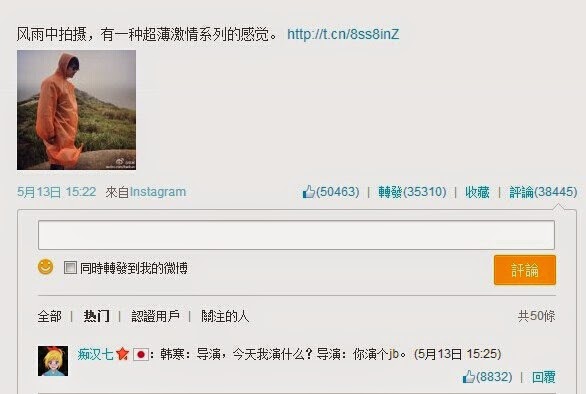 When netizens have forwarded as a habit, "under a" hot is not difficult to foresee. "Will have no period" Pilot microblogging released the night before, Han microblogging notice: "fixed gear trailer, tomorrow 9:00 See bless me not to upload the wrong video.." Fans immediately reply quipped: " satin hand who open tomorrow at nine-time test. remember to bring the ticket and 2B pencil. "

Whether intentional or unintentional, Han microblogging gradually became a fertile ground for the growth of the satin hand, the exposure also increased significantly, which is "no period after the" microblogging outbreak has laid a solid foundation. Of course, in addition to the hands and love pink satin, Han their influence and power of its circle of friends also not be underestimated. Through the "no period after the" pilot microblogging large third-party data analysis software, transponder 33 million people, more than 30% of the figure is made up of people and add user-contributed V, Overheating Ningcai Shen nearly 8,000 large V, "New Weekly" and other media officials are involved in the topic of micro-propagation.

So, microblogging play well what is the use? Listen to the other associated data: "no period after the" trailer was released, within 24 hours Youku trailer-on-demand will reach 3.4 million peak, more than the sum of Youku notice 24 hours after the annual peak-demand film. As the final box office, guess what?