88% of American marketing leaders actively involved in marketing products and services to consumers in China were extremely confident in their marketing campaigns. Nevertheless, just half designed local strategies specifically for the Chinese market, and almost one in five admitted to having little to no understanding of China’s marketing practices. American brands still don't know enough about China and they don't seem to care.


The results reveal the growing prominence of China as a major market for U.S. brands:
source : https://www.teamlewis.com/magazine/top-considerations-for-marketers-looking-to-tap-into-china/


The vast majority (88%) of American marketing leaders actively involved in marketing products and services to consumers in China were extremely confident in their marketing campaigns, according to a new report from Lewis Research. However, only half of the 351 top US marketers surveyed had devised local strategies specifically for the Chinese market, and almost one in five admitted that they had little or no understanding of China's business practices. "One of the main issues highlighted in the report is the false belief of American marketers that they fully understand marketing practices in China," said Matt Robbins, vice president of knowledge and research at Lewis Research. "The motivations that drive consumer purchases are entirely different from those of American consumers, and knowledge of the cultural principles behind these motivations will be key to the success of American marketers in China."
Publié par MIKE à 00:24 Aucun commentaire:


An advertisement broadcast since early January on Chinese television by an Alibaba subsidiary and featuring a couple of men has raised many reactions on social networks. In China, it is not every day that we can see on television a man introduce his parents to another man - and this is precisely the subject that animates the discussions of many spectators this week ”, relates the Chinese site Sixth Tone this Saturday, January 11. In a 23-second clip from an advertisement for a food brand, broadcast by the Chinese company Tmall, a subsidiary of the giant Alibaba, we can see a young man presenting his companion to his family during a festive dinner for Chinese New Year.

If two young women react with "chuckles and gossip", describes CNN, the father, him, warmly welcomes his son's spouse and invites him to "feel at home". In the week following the start of its broadcast, reports the American media, the video “ignited the web when it was published on the Chinese social network Weibo by LoveMatters, an organization specializing in sex education and relationships. love.

" The latter praised the approach of Tmall, an "influential" company that supports the LBGT movement, adding that it is "important for this community to be visible and recognized by the general public". The clip has been viewed millions of times, generating “more than 4,500 comments, many of which were positive,” notes CNN. Quoted by the American chain, a Net surfer commented for example: "Tmall subtly avoids pronouncing openly on its position on the subject of homosexual couples, but it is already a great step forward". As for the parent company Alibaba, it replied to CNN that "the Chinese New Year is a good time for family reunions and inclusion", without actually taking a position on the LGBT community.


Officially, homosexuality is no longer illegal in China and was removed in 2001 from the list of mental illnesses, but in fact, CNN recalls, "Experts and activists claim that members of the LGBT community in China are suffering always discriminations ”on the part of the State and the population

Limit of the health system in China


In China today there are almost no general practitioners. One of the current characteristics of the Chinese health system - however strongly inspired by the French model it seems - is the absence of a first-line health service. In fact, barely 6% of doctors are generalists, 94% are specialists (50/50 in France). The Chinese therefore do not have a family doctor and must go to the hospital to consult for whatever reason. But while monitoring the state of health is a major concern for the population, how is it ensured in the absence of a network of general practitioners?   For the 50% of the population living in the countryside, the only solution is the dispensary where the nursing staff is poorly qualified: the service is provided by the famous "barefoot doctors", who are not doctors in the sense that we hear it, but people with very rudimentary training. In urban areas, the 400 million migrants - ie those who have left the countryside to work in big cities or their peripheral industrial zones - cannot use "barefoot doctors". The hospital is therefore their main access to healthcare solution, difficult to access for financial reasons.


Conversely, the wealthiest do not hesitate to go abroad, including for a routine check-up. In 2016, more than 500,000 rich Chinese people traveled outside of China for their health, spending more than 10 billion euros, mainly on a health check-up and cosmetic surgery.

Chinese middle Class has a limited access to good treatment


There remains the middle class, estimated at more than 300 million people, whose annual income is between 60,000 RMB and 229,000 RMB (i.e. between 7,700 euros and 29,300 euros), which has purchasing power in strong growth and which is more and more sensitive to health issues, at least its health.

For the latter two categories, representing 21% of the Chinese population, in the absence of general practitioners, the solution consists in going to prevention and screening centers to ensure their medical follow-up.
The market is large and promising. Appeared 15 years ago, it is estimated at more than 200 billion RMB (26 billion euros) in 2016, which is very modest compared to the total health expenditure of the country (less than 2%), but with very significant growth: it should reach 300 billion RMB (38 billion euros) in 2020, i.e. a multiplication by 6 in value between 2014 and 2020 (source Frost and Sullivan) .A standard balance sheet, common to the three groups, provides most often dental, vision, hearing, blood pressure measurement, complete blood test, hepatitis B and C screening (China has the highest number of people infected with hepatitis C worldwide), syphilis and AIDS (frequently an AIDS patient in China loses his job), a urine and stool test, a chest X-ray but also tests for markers of lung and liver cancers and intestines; finally, the assessment includes a nutrition consultation.

general trends about health in China


Men also have a cardiovascular test, single women have a mammogram, and married women have a smear and pap smear in addition to the mammogram. The centers offer other optional exams, which some employers include for a category (most often managers) of their employees, rarely for all, or which the employees buy themselves: MRI of the head or even of the whole body, densitometry bone, thyroid ultrasound, colonoscopy… All the players offer very comparable content and prices. The market is financially stable, growing very fast, but not very different: the ingredients for a ruthless competitive war are there. Today, two categories of players compete for this market: public hospitals - which account for 85% of activity - and a few private chains. 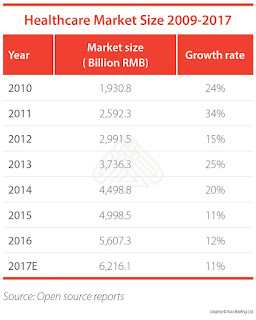 The new Franchise Market in China

Franchise Business are popular in China, here is why

Diversifying American cafés in China was as of late in the news in the midst of reports that inexpensive food mammoth McDonald’s has sold its terrain China and Hong Kong organizations to a consortium between the state-possessed Chinese aggregate Citic and the American private value monster Carlyle Group for $2.03 billion. Among the key purposes of the arrangement was that it gives diversifying control to the Citic/Carlyle consortium in the PRC for a time of 20 years. Insider reports of the dealings that finished in this arrangement revealed that controlling the future diversifying rights was one of the key regions of enthusiasm from the consortium. McDonald’s will hold a fifth of the proprietorship enthusiasm for the corporate substance that works its diversifying and tasks in the PRC, yet this deal speaks to a huge piece of new CEO Steve Easterbrook’s arrangements to turn the grieved cheap food organization around. It is obvious the future diversifying rights in China would be such a wellspring of enthusiasm for the Citic/Carlyle consortium, as diversifying American brands specifically in the PRC has been an extremely effective plan of action, especially as Chinese customers have delighted in expanded pay as the PRC’s economy has soar in development since the 1980’s. As China has created in the course of recent decades, numerous remote (especially American) organizations have turned out to be fiercely prominent. This is especially valid for American drive-thru eateries like Kentucky Fried Chicken or McDonalds. Notwithstanding, it additionally incorporates retail foundations, style marks and an entire host of different enterprises. Outside brands are progressively prominent and will just keep on winding up more so as Chinese buyers appreciate the products of their nation’s very fast monetary development in their checks. This makes diversifying outside organizations in China an especially worthwhile business opportunity, yet an open door that should be drawn closer with alert by remote organizations, who must track cautiously to guarantee they go along completely with China’s muddled lawful structure identifying with offer establishments. Moreover, diversifying in China can offer some novel difficulties that many would be franchisors need to see unmistakably before entering the Chinese market by offering establishment openings in the PRC