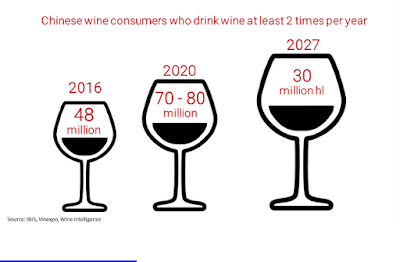 You can downlaod the PDF here https://www.academia.edu/35475657/Wine_Market_trends_in_China


Overview of the Report


Over the years, China is becoming the second world’s largest market for importedwine. With a population of nearly 1.38 billion, a flourishing middle class andsophisticating consumers, China presents big opportunities for international wine brands and businesses. Economy is rapidly changing and it’s important to stay focuson the latest trends and insights to grow and harness its market potential

Guide for Moving to Shanghai

Let me introduce to you Guys first My favorite video selection

Shanghai is a lovely city for many expat source facebook


China's largest city is also the most cosmopolitan, offering visitors a chance to experience the past, present and future at the same time. The Huangpu River divides Shanghai into two districts: Pudong and Puxi. The Pudong skyline seems to have been ripped from the Jetsons, with the Oriental Pearl TV and the radio tower looking a bit like a two-headed lollipop. On the Puxi side, you can walk on the Bund River District to get a glimpse of old Shanghai.

Shanghai's expatriate workers have benefited from the city's rebirth and tremendous growth of the past 10 years - profiting from local real estate investments, manufacturing opportunities and market liberalisation


Americans who raise a family in Shanghai - a Shanghai is a Huge city of 26 million people - and the Chinese are known for pumping some of the best students in the world.

When we realized that a few blocks from our new home was one of the best state schools, when it comes to elite city dwellers, we decided to register our son. He would learn the most spoken language in the world. What should not love? Many, as it turned out. And it was only the first week of kindergarten. The day after the episode of the egg, I went to school to confront Master Chen, screwing up in my belief about individual choice. "
"We explain that eating eggs is good for them, that nutrients help build strong bones and teeth and help with sight," I said, trying to be authoritative. "We motivate them to choose ... we trust them with the decision."


In truth, no. I had never been able to feed my son with eggs. He is a tough eater. Later, Master Chen put me aside for a lecture. "In front of the kids, you should say, 'Master is right, and Mom will do things the same way,' OK?" I nodded, slightly stunned.
Many studies support the Chinese education mode. The researchers found that six-year-old Chinese children trade their American peers into their early math skills, including geometry and logic. In the last decade, two teenagers in Shanghai have twice been the world's No.1 student on the PISA (International Student Assessment Program), which assesses problem-solving skills, while American students are middle of the pack. When young Chinese go abroad, the results are impressive. They earn more places in the best universities in the world. The Ivy League is recruiting eight times more Chinese students than it did ten years ago, according to the Institute of International Education, and the Chinese are helping to launch start-ups in Silicon Valley in disproportionate numbers.
Yet from my perch in Shanghai, I suspected that I would have objections to Chinese education. Force-feeding would force a teacher to be dragged to court in the United States, the land of choice of infants, free play and individualized everything. In China, children are also subjected to high-level tests at every turn, which encourages them to focus on toddler books.


I started to wonder: what price do the Chinese pay to produce their "smart" children? And do we really have something to learn from the Chinese education mode? For the past five years, I have been a parent of a child in the Chinese school system and have interviewed Chinese teachers, parents and students at all levels of education. I discovered that there are indeed Chinese "secrets". Most have to do with attitudes about education.

There are real benefits to a "teacher knows best" mentality. As I struggled to submit to this kind of system, I began to observe that when parents lined up on teachers, their children too. This signaling gives the teacher an almost absolute mastery of his class. My son was so afraid of being late for classes, missing school or disappointing his teacher that he once raised a stench when I approached the possibility of missing a few days of school for a trip in family. He was five years old. The fact that the teacher is the center of the class also gives students a head start in subjects such as geometry and computer programming, which are more effectively taught through direct instruction (as opposed to the discovery of the student). fourth year published in the journal Psychological Science. A 2014 study of more than 13,000 students in Educational Assessment and Policy Analysis found that first-year students with math difficulties learned more effectively when teachers demonstrated problem-solving procedures and repeated practices. .

On the other hand, Western teachers spend a lot of time dealing with classroom behavior and crushing mini-revolts of students and parents. A Chinese teacher who arrived in the United States two decades ago reminded me of his