100 million Chinese tourists every Year: the next booming market

Soon about 100 million Chinese tourists have traveled outside the country every year. This is a market that is valued over $ 100 billion per year, says Atout France Tourism Development Agency of France. But for European countries would be a mistake to be complacent because Chinese tourists are increasingly demanding. Some 538,000 Chinese tourists chose Italy in 2013 and another 425,000 collected France says CESIF, Business Studies Centre of Italy-China Foundation. An important global competition stakes to capture this new flood tourists. First priority: be more "Chinese-friendly." 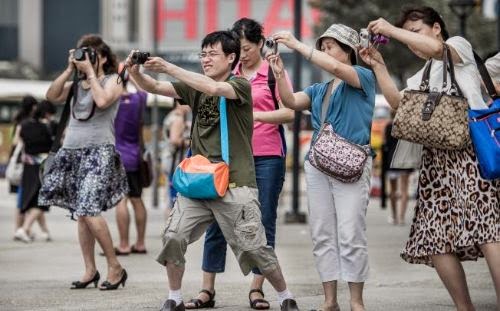 The desire to travel

Never in history has an "invasion" been desired and courted. The flood of Chinese tourists is peaceful and worthwhile US $ 102 billion per year, writes Atout France. Some 98 million Chinese tourists have traveled outside of China, according to CESIF. The World Tourism Organization has announced that in 2012 China became the world's largest market for outbound tourism spending, overcoming the United States and Germany. According to the latest data from Global Blue, the service provider tax refund and shopping based in Switzerland, the average spending of Chinese tourists output last year was US $ 1.218, with Russia comes right after.

It is in this spirit that Le Figaro in 2011 launched a free quarterly magazine for Chinese luxury tourists named Paris Chic. It is published in Chinese and distributed in China and France, and is a true guide to fashion, beauty, watches and gastronomy. In one of Italy's leading newspapers, Corriere della Sera, did the same, printing a publication that targets Chinese travelers. Also the Italian publisher Class Editori made ​​the same choice on a quarterly luxury magazine called Excellence of Italy. The same business and financial news publisher Chamber has launched a campaign for traffic signs in China before the 2015 Expo in Milan, Italy so you can be more "Chinese-friendly."


80 percent of Chinese tourism is composed of groups

Atout France says that about 80 percent of Chinese tourism is composed of groups, including small groups of 8-10 friends, although the proportion of solo travelers continues to grow. "At first, they used to visit something like 10 to 11 countries in a row, for 10 days. Now, this quantitative approach is less dictatorial and during a vacation in Europe Chinese groups tend to visit three to four countries in search of higher quality, "says marketing consultant Giancarlo Dall'Ara Italian hotel. Now, Chinese tourists want to know the best country they are visiting, spending your vacation in one or two locations. They love themes, such as the discovery of wine, museums and country life in Europe. The Expo will be in Milan, Italy, but can ask the Chinese to discover Florence, Tuscany and Venice wineries too. Unfortunately, from the point of view of several Chinese tourists their first foray into European countries was quite disappointing. They have dreamed all his life of Versailles and the Coliseum, but very often, either because of cost or lack of large capacity hotels in the center of cities like Rome, Paris and Madrid these groups are sent to the not so smiling suburbs. Then there is the issue of visas.

A 30-year-old Chinese executive working in Beijing admits that a trip to France was a disappointment. "I remember a lot of negative things from the train you have to take the capital Roissy: horrible and impractical," he says. Wang Yan, a Chinese businessman in the wine sector, agrees. "In the Italian hotels do not even have a kettle to make tea, which is essential for the Chinese people." "Italy, like other European countries, is not Chinese-friendly," Dall'Ara supported. However, the goal for the Italian, French and Spanish tourism is precisely Yan Wang. Individual Travel Chinese began growing two years ago. In 2012, visas issued from France increased by 30 percent. People who can afford it have all the steps taken by the Chinese travel agencies as Ctrip, one of the largest online travel agencies. Of course, several travel and tourism companies worldwide are developing strategies to gain market share in the booming country.


The number of tourists to France and Italy

The number of tourists to France and Italy are underestimated because it does not include inputs from other countries in the Schengen area. via


Chinese travelers: the key for the French tourism development


A Schengen visa allows a person to enter the country issuing the visa, and then freely travel throughout the Schengen countries. Some countries are much easier to obtain a Schengen visa, although it is assumed that the process of being standardized. A recent study by the Agency in Beijing Trump France holds estimated 1.8 million Chinese tourists in 2013-14. Italy can hold 1 million Chinese tourists for exposure.

Chinese Travellers are still in love With Paris
In its report on the tourism sector in France in 2013, DGCIS announced that the number of Chinese visitors increased by nearly 23%. Yet, according to an article in the Anglo-Saxon press (see here in English), they suffer from an evil called "Paris Syndrome", and the cultural clash between a fantasy city and its brutal reality would be the cause.


In 2012, the Italian Embassy in Beijing processed only 286,000 visas. Italy is committed to welcoming as many Chinese as possible and has recently opened offices more in order to process more visas. "They have opened two new offices in order to release the visas in three to five days., I think it's a step in the right direction," says Dall'Ara.
In particular, the efforts of all Schengen countries should focus on visa facilitation. The process for Schengen visa remains complicated. A report by the European Travel Commission entitled to understand the Chinese outbound tourism, one interviewee said: "Given the long and tedious process of visa, not worth going there for a short period of time." Words of tourist this reflect a common frustration with European visa procedures. They require a lot of documents, such as proof of deposit from a bank, confirmed reservations for hotels, permission to be absent from work and so on. Some embassies do not even have Chinese application forms. Clearly this is a significant disadvantage for European tourism. source

A 2010 report of the European Tour Operators Association learned that 26 percent of potential Chinese visitors to Europe canceled trips due to the slow processing of Schengen visas. The processing of the visa at the British Embassy, which is not a member of Schengen, was listed as the most difficult, followed by France and Italy. Germany consular authority the best qualified to be fast and friendly.


The report of the Commission of European Tourism notes that despite all the Schengen countries that have the same basic needs, Chinese travelers appreciate the differences between them marked. Are entire forums online devoted to this subject, ie Internet users know that the embassy provides the fastest and smoothest application process. The Internet generation has fewer barriers to independent travel in Europe, you can leverage the collective knowledge online. This means that to attract Chinese tourists, a truly global visa fight is taking place.
Publié par MIKE à 20:55 Aucun commentaire: