The Chinese Communist Party (CCP) to power today announced that it punished more than 182,000 of its executives last year, in what authorities describe as a vast anti-corruption campaign . The bodies responsible for combating corruption in 2013 received more than 1.95 million records across the country , and have investigated some 172,500 cases, said Huang Shuxian , deputy director of the powerful Central Commission for Discipline Inspection , Constable Party . 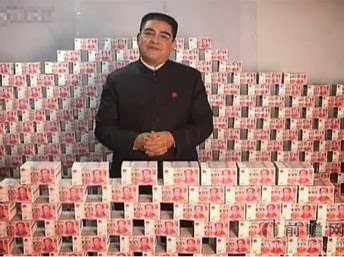 In the end, 182,038 frames have been subject to disciplinary sanctions, which may range from a warning to expulsion from the party or worse - and prison sentences and fines may be imposed by the addition of Justice members were excluded . " The disciplinary authorities of the Party at all levels (...) supported the adoption of sanctions against all ( members) corrupt ," said Mr. Huang during a briefing.
Chinese President Xi Jinping, at the head of the Party since November 2012 had shown its intention to take " flies like tigers ", that is to say, managers at all levels , believing that corruption could threaten the very existence of the Party. So far , at least 19 officers with a rank equal to or higher than that of deputy minister were pinned in this broad anti-corruption movement initiated by Xi, including a Vice - Minister of Public Security.
But experts believe that only political reforms depth could effectively counter rampant corruption , and nothing has been done in this direction. Meanwhile, the central authorities have imposed a politicians austerity , banishing banquets, luxury gifts, or restricting travel abroad.
http://china-market-research.blogspot.com/2013/11/why-luxury-market-in-china-is-changing.html
Publié par Olivier à 22:27