The authorities of Guangdong Province are set to launch a crackdown three months on the sex industry in the province after the media recently discovered rampant prostitution in massage parlors and hotels in Dongguan. Li Chunsheng , Vice Governor of Guangdong and director of the Department of Public Security of Guangdong , said in a televised news conference Monday that all entertainment venues involved in the organization of sexual services will be targeted.
Guangdong started snapping industry underground prostitution

Police remove suspected prostitution at a hotel in Dongguan, Guangdong province, on Sunday . More than 6,000 police were on duty to suppress prostitution in entertainment venues , including massage parlors and sauna houses . Fang Guangming / for China Daily "Local police are protecting the sex industry or arrange sexual services will be severely punished ," said Li .
The crackdown came after China Central Television reported Sunday morning that the sex industry is flourishing in Dongguan, an entertainment center in the region of Pearl River Delta. CCTV report said there was prostitution in five cantons Dongguan. He showed secretly filmed images of scantily clad women parade on stage in places and venue managers openly introducing customers to their prostitution services . Dongguan, which has become a major center of manufacturing and commerce of the world , is also famous for its sumptuous metro stations centers casino bath , massage parlors and illegal brothels. The sex industry is supposedly so lucrative that the city is known as " the capital of sex " in China . The media estimate that at least 300,000 people work in the sex industry in Dongguan. China Daily could not confirm that figure .
The announcement of a crackdown provincially comes a day after the Department of Public Safety and the Guangdong authorities have launched a joint investigation into prostitution in Dongguan on Sunday . On Monday morning , 12 entertainment venues involved in prostitution and other sexual services were closed and 162 people studied , authorities said. The campaign targeted 1,948 entertainment venues across the city in the prefecture. Eight policemen, including a director of the office of public safety and a director of the township police station , were suspended and are under investigation , according to the Bureau of Public Security Dongguan.
Police stations in five cantons are being investigated for dereliction of duty or not to respond to reports of informants in prostitution in places of illegal entertainment.
The crackdown has prompted mixed reactions ranging from sympathy for sex workers to aid the police in a country where prostitution was banned for six decades. Under the law of China on sanctions for the administration of public security, prostitutes and their clients are subject to detention and fines . The organizers of sexual services are reviewed by the authorities. Hu Chunhua , Party chief of Guangdong, has also stressed the need Sunday to investigate the sex trade in Dongguan and throughout the province. The Yuanfeng Hotel in Zhongtang Township , outlined in the report of CCTV to accommodate prostitution suspended business on Monday , with only a security guard stroll. Huang Wenhong , sales manager at a gas station next to the hotel , said that "many people have visited the hotel in the evening during the last two weeks of the Spring Festival . " A manager of a foot massage center nearby, who declined to be named, said the repression of prostitution would lead to huge losses to the entertainment industry in Dongguan. 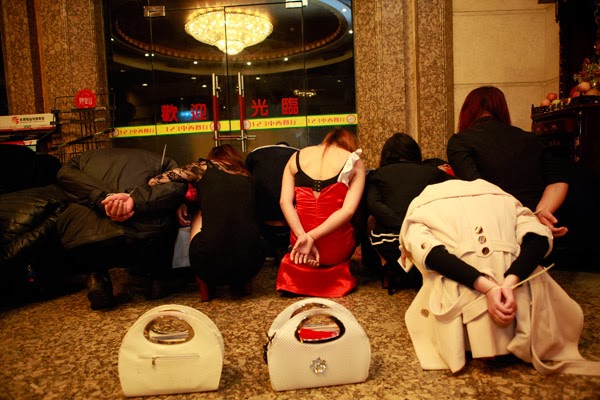 "Our company has also been greatly affected since Sunday. We had to suspend business because there are fewer customers today, " said the director.
"We are concerned by hiring new workers in the near future. Girls will be afraid to come to Dongguan. " Punishment will cost a lot of women, with a number of others related to the entertainment industry , their jobs, he said .
" I intend to find another job in the city. If worse comes to worst , I'll let Dongguan, " he said. Lu Weiqi , deputy director of the Office of Dongguan Public Security , said the local government is planning to introduce tougher measures to deal with prostitution. "We will ensure a safe and fair for those places that are not engaged in prostitution environment"