Largest 3D printer in the wold


Big Delta is the largest 3D printer in the world with a height of 12 meters. It will create clay houses. 3D printers are growing every week, but it's just mind blowing.

Earlier this week, 3D printing specialists WASP (World's Advanced Saving Project) announced that they would propose a 3D printer 12 meters high. Once it is built, the Big Dela will be the largest 3D printer on the planet. 3D printer of this size can build many things. But these designers have said it is specially designed to provide cheap houses. The concept is to use local materials such as earth or clay and build the house with an energy below 100 watts. 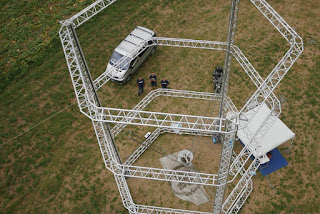 With a metal frame of 6 meters and a print stream that also functions as a mixer, the project WASP is a real mammoth in 3D printing. Considering these characteristics, Big Delta is perfectly suited to quickly build houses in areas affected by natural disasters.


But in addition to providing a housing solution in a crisis, WASP said Big Delta could also be used to provide cheap houses in densely populated areas. The United Nations estimates that the world needs 100,000 new houses per day for the next 15 years to cope with rapid population growth and the concentration of people in large cities. But WASP goes further by saying that in 2030, 4 billion people will need housing while their annual income is 3,000 dollars. And this Big Dela 3D printer can help in this housing crisis. WASP is planning to unveil its revolutionary 3D printer during this weekend to prove its performance. It is not known the price of a house and maintenance of this printer, but this type of project is always interesting. There is a trend of increasingly strong to use 3D printing to create whole houses. Chinese had also proposed a solution that allowed to print a 3D house in 24 hours.