Ever-expanding wireless network (Wi-Fi) coverage, coupled with increasing affordability of smartphones, has prompted more and more users to access the Internet via mobile phones in China. In 2013, 81% of Chinese Internet users accessed the web via Smartphones1. In recent years, with the rapid development of social media sites, users can connect with friends anytime anywhere through smartphone applications. Increasingly, people are interacting with others via social media, which are set to be an important channel for consumers to have access to information of daily life, as well as messages promotional product and services.

According to the "Survey of consumers of the middle class of China" HKTDC, social media is one of the channels through which respondents share their consumer experience Sixty-three percent of respondents agree.: "I believe in the products recommended by people I follow on Weibo and WeChat and I am interested in giving them a try." Consumers in China rely on word-of-mouth. How marketers generate positive word of mouth for their products and services through social media in the consumer community of friends is an important part for business promotion and marketing.

More and more companies have added features to "share" their websites, allowing users to click and share their own Weibo the information about the company and its product page. For example, when a user believes his friends would be interested in a product or service, it may just tweet this piece of information as well as photos and a text description, without the need to write new content. 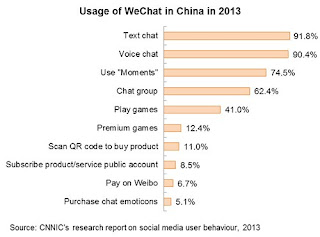 WeChat is an instant messaging app4 Tencent launched in 2011 to provide the public platform, community of friends and push message functions. Users can add friends and follow public accounts they love choosing "shake", "search by phone number", "look around" or "QR code scanner". According to reports, the average monthly WeChat active users reached 360 million in 2013.
WeChat separates the public account into account subscription and service account. The goal is to establish new rules for messaging
Communication on group to minimize the disruption of followers. subscription account mainly provides news and information that meets the needs of general users. subscription account can send a daily message that appears in a separate folder, but users do not receive an alert. service account is used to provide services and is more appropriate for the bank and corporations in general. Restrictions on group messaging service account are stricter: one message is allowed monthly but followers will receive an alert. The push message in the chat list. Businesses can choose one of these two types of accounts to interact with their customers, depending on the nature of their products / services and human resources. more information http://wallblog.co.uk/2015/10/27/five-things-we-can-learn-from-chinese-digital-firms/
and here

Over 10 major Chinese websites, including Tencent, Sina, Sohu and Netease currently provide Weibo (microblog or) social media service. At the end of 2013, China had 280 million users of Weibo, representing approximately 45.5% 2 of total Internet users. Weibo is a sharing of information, dissemination and acquisition Platform3 allowing any person or group selected by the user to read text messages of 140 characters, and access photos and videos etc. . The main features include a Weibo: share / outposts (70.1%), the search engine news / current affairs (69.5%) and post content (64.6%), etc.

Companies appear interesting content on Weibo in the hope that users actively tweet these messages to friends and raising the brand profile and awareness of user communities. Of course, how to attract users to read and tweeter these positions is the key.